SNUBH made pregnancy, childbirth possible for patients with atresia uteri

﻿An obstetrics/gynecology team at Seoul National University Bundang Hospital (SNUBH) has presented a successful case of pregnancy and childbirth by a patient who had received robot-assisted extensive cervical resection by conducting “transmyometrial embryo transfer.”

Cervical cancer refers to a tumor found in the cervix, the entrance to the vagina within a woman’s uterus. The early discovery of cervical cancer in women of childbearing age has become possible recently, leading to the development of a surgical method that removes only the cervix rather than the entire uterus to preserve fertility.

From left, Professors Kim Seul-ki, Suh Dong-hoon, and Kim Hyun-jee at Seoul National University Bundang Hospital (SNUBH)’s Department of Obstetrics and Gynecology have presented a successful case of pregnancy and childbirth by a woman who had received a robot-assisted radical trachelectomy by conducting “transmyometrial embryo transfer.”

However, the research results of Professors Kim Seul-ki, Suh Dong-hoon, and Kim Hyun-jee will likely give hope to these patients, the hospital said. 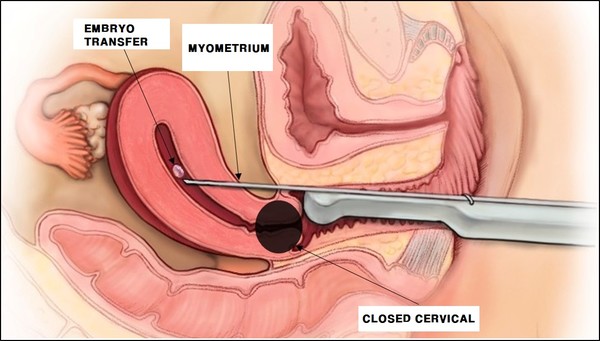 According to their report, a 30-year-old woman was diagnosed with stage 1 cervical cancer last year and received a robot-assisted radical trachelectomy. After three months, her cervix was closed. However, the three professors conducted an embryo transfer that passed through myometrium, making her safe pregnant and give birth to a baby safely.

The woman had atresia uteri after extensive surgical removal of the cervical. As expanding her cervix became impossible, she faced a situation to give up pregnancy. However, the mother was desperate and became pregnant with the help of the professors. Instead of going through the entry of the uterus, they inserted a catheter, a very thin metal pipe, through the myometrium that enabled embryo transfer and successful pregnancy.

“Women who received a radical trachelectomy and has a structural abnormality of the cervix can try to get pregnant through transmyometrial embryo transfer,” Professor Kim Seul-ki said. “If the research continues and many successful cases pile up, it will provide a choice for couples going through difficulties with pregnancy.”

The research result was published in the journal Clinical and Experimental Reproductive Medicine.