|Since its introduction in October 2007, it has presented the world standard for robotic surgery as a single department with the best record in number. 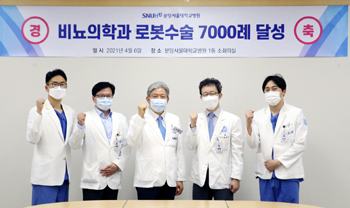 A commemorative moment of the 7,000th robotic surgery of the Department of Urology.
The Department of Urology, Seoul National University Bundang Hospital, introduced the first Da Vinci Robotic Surgery System in October 2007, and has achieved a record of 7,000 robotic surgeries as of February of this year.
According to the hospital, a total of 7037 robotic surgeries were performed between October 2007 and February 2021.
Out of all the robotic surgeries, 3,910 cases were for prostate cancer, 1,865 cases were for partial resection for kidney cancer, and 238 cases were for cystectomy (including partial resection) for bladder cancer, which is considered a highly difficult operation.
Partial nephrectomy assisted by a double robot system can minimize the loss of kidney function, enable fast recovery, and assure of high rate of survival.
Besides that, if the kidney is conserved as much as possible, the risk of complications that the weakened kidney can cause later is reduced, and additional medical cost may not incur.
Professor Seoksoo Byun, Director of the Department of Urology, said, "We will strive to bring another innovation to the treatment of urinary cancer, evolving medical techniques with robots, improving surgical environment and system, and providing safe and perfect robotic surgery."
He also added, “We will continue our research that leads to high medical value and is meaningful so that we can set global standards.”
Share