-As a treatment algorithm considering risk factors of relapse and clinical pathological features,

-It is helpful in selecting a target patient who needs surgical treatments and estimate the scope of surgery.

We have got a research result suggesting a treatment algorithm by analyzing risk factors of recurring pancreatic neuroendocrine tumors. It will be helpful in selecting a patient who needs surgical treatments and estimate the scope of surgery, considering the prognostic factors and clinical pathological features based on the size of the pancreatic neuroendocrine tumors.

Dr. Wooil Kwon and his team including Dr. Jinyoung Jang and Dr. Hongbeom Kim at Hepatobiliary and Pancreatic Surgery, Seoul National University Hospital studied the data from a large cohort of 918 patients, who underwent the treatments for pancreatic neuroendocrine tumors between 2000 and 2017. At the study, they analyzed the risk factors for recurring tumors and opened the result to the public on the 28th, suggesting a treatment algorithm.

Unfortunately, it is tricky to decide if a patient needs a surgical treatment and to determine the surgery scope since its characteristics vary from benign to malignant. The prognostic factors are also unclear and the current treatment guidelines are too simple with a certain limitation.

In particular, the prognostic values are not only inconsistent but also not fully verified. That said, the result of this study has significant implications for understanding pancreatic endocrine tumors.

According to the study, the 5-year survival rate without having a relapse was 86.5% after the patient underwent the surgery for pancreatic neuroendocrine tumors.

It is reported that the risk factors are ▲ remaining tumor cells on the resection surface after surgery, ▲ the grade classified high in the World Health Organization (WHO), and ▲lymph node metastasis.

While it is hard to say that the size of tumor can be a direct risk factor to cause relapse, we could confirm that it indirectly affects recurrence when clinical pathological characteristics are reflected.

So far, most studies have recommended observing the progress of tumors less than 2cm.  However, we have found that even tumors sized 1 to 2 cm have 10% rate of metastasis to lymph node and 20% of them are identified as high in the WHO tumor classification, showing that its malignancy cannot be ignored.

Our team has recommended observing tumors less than 1 cm can be appropriate but tumors 1 to 2 cm require surgical procedures. 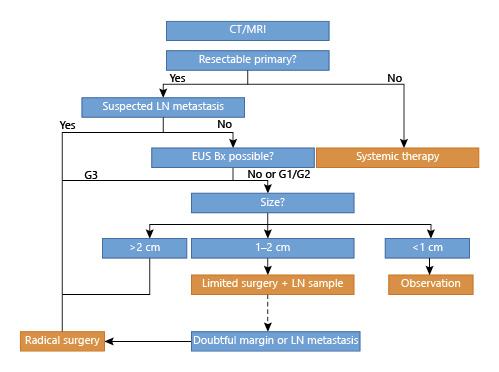 He also added, “Following our study, it is valid to determine a treatment procedure based on the size of tumors even though the size itself cannot be an independent risk factor for relapse. In the future, it will be an important milestone to predict 1 to 2 cm high-risk tumors."


The research result was published in "Neuroendocrinology," the European Journal of Neuroendocrine Oncology, which has the highest public confidence in the field of neuroendocrine tumors.