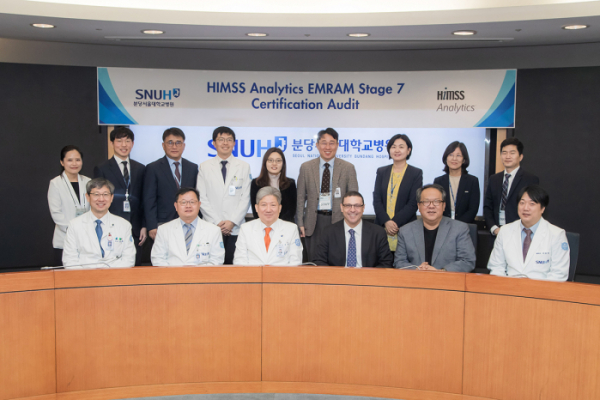 HIMSS is an American Healthcare Information and Management System Society that aims to improve the efficiency of medical systems, incorporating IT technology into the medical environment. It is the world's most authoritative and credible certification body that evaluates the informatization level of medical institutions with the goal of improving medical quality, patient safety, efficiency and accessibility.

Seoul National University Bundang Hospital affirmed again that it is a world-class informatization model hospital by receiving the highest Stage 7, in the 2019 assessment following 2010 and 2016.

After the assessment, it confirmed that all 163 criteria were met, and the excellent security and availability of the system were assured through certification in the information security and business continuity planning (BCP) sector.

Rong-Min Baek, President of Seoul National University Bundang Hospital, mentioned, "Through this certification, we got to be able to confirm the accountability of BESTCare 2.0 once again, and we look forward to having a new step forward with the better direction for improvement and development."

BESTCare 2.0 has been successfully exported to six hospitals the Ministry of National Defense operates in Saudi Arabia and to the Aurora Health Care Group in the United States.