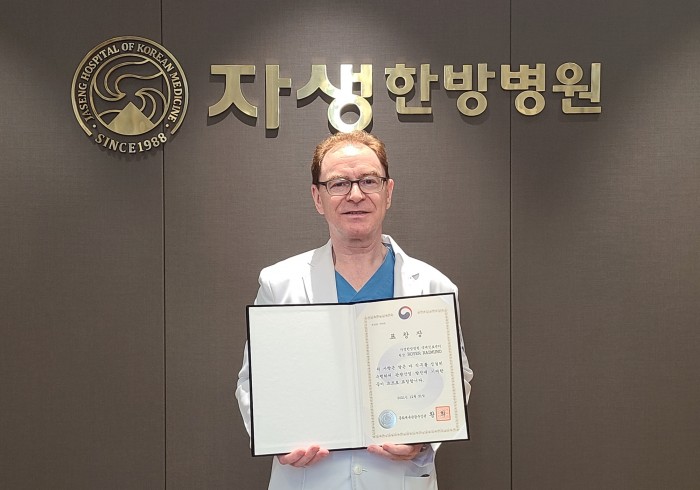 Jaseng Hospital of Korean Medicine (President Lee Jin-ho) announced that Dr. Raimund Royer at Jaseng International Clinic has received a commendation from the Minister of Culture, Sports, and Tourism in recognition of his contribution to developing overseas markets for traditional Korean medicine and its globalization.

Dr. Royer is also known for helping to lay the groundwork for medical tourism by participating in various international PR and marketing activities for traditional Korean medicine. He was appointed as an ambassador of Korea in medical tourism, led familiarization tours, and worked with the Ministry of Culture, Sports, and Tourism, the Korea Tourism Organization, and other public agencies.

Jaseng International Clinic where Dr. Royer works has been spearheading the globalization of traditional Korean medicine. Three languages (English, German, and Japanese) are spoken at the clinic, and there are coordinators who cater to the needs of foreign medical tourists from the moment they arrive in Korea until they board their flights back home.

The number of first-time visitors from abroad per year was a mere 180 when the clinic opened its doors in 2006, but it increased each year to 2,500 in 2019, just before the outbreak of COVID-19. In 2017, the clinic was chosen by the Ministry of Health and Welfare as a partner in the Project on the Establishment and Operation of Traditional Korean Medicine PR Center in Kyrgyzstan, and it helped establish the PR center and dispatched its medical staff.

Jaseng Hospital of Korean Medicine is at the forefront of the globalization of traditional Korean medicine. Last July, it officially became accredited as a continuing education provider by the Accreditation Council for Continuing Medical Education (ACCME). Since then, it has been offering traditional Korean medicine refresher education to medical professionals in developed countries in the West, including American doctors. In November last year, Jaseng Hospital of Korean Medicine successfully held the 3rd Annual Jaseng Academic online together with Arkansas College of Health Education (ACHE). It saw the participation of around 350 healthcare professionals, including oriental medicine doctors and modern medicine doctors from around the world.