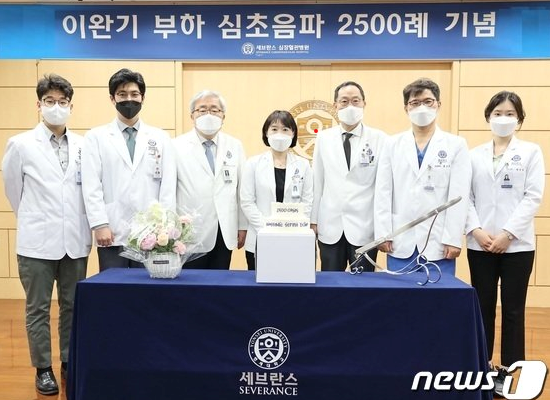 A test developed by Ha Jong-won, General Director of Severance Hospital, that has become an international standard

Severance Cardiovascular Hospital announced that it had recently performed the 2,500th echocardiographic diastolic stress test at the hospital.

Diastolic stress echocardiography is a test performed to determine the cause of symptoms in patients who experience shortness of breath, or dyspnea, in their daily activities.

Dyspnea is a typical symptom of heart disease that occurs during exercise when the diastolic function of the left ventricle is impaired. It can also be caused by various other factors.

In the past, it was difficult to determine the exact cause of dyspnea if an examination was not performed when the symptom appeared.

This was because echocardiography is generally performed while the patient is lying down. Since the patient remains in stable condition where the heart is not strained, symptoms such as dyspnea could not be induced.

Severance Hospital Director Ha Jong-won thus developed diastolic stress echocardiography while training at the Mayo Clinic in the United States in 1999 with the aim to address this issue.

He designed a test device that could produce an exercise effect with the patient lying down so as to induce dyspnea. It had bicycle pedals that the patient would be required to step on and use as an ultrasound of his or her heart was viewed.

This examination made it possible to check changes in heart function, such as in the heart valve function and the level of increase in the heart’s internal pressure, while artificially inducing an exercise effect in the heart.

Severance Cardiovascular Hospital introduced diastolic stress echocardiography for the first time in Korea in 2003, and it has since distinguished itself globally in this field.

In addition to hosting international symposiums to share its expertise with eminent scholars from around the world, Severance Cardiovascular Hospital has performed the greatest number of related studies in Korea, and the findings have been published in renowned international journals.

It set a record in 2015 by performing the 2,000th echocardiographic diastolic stress test, and it has reached 2,500 cases after 7 years.

Ha Jong-won, General Director of Severance Hospital, said, “We will cement our position based on the knowledge gained at the hospital while performing the echocardiographic diastolic stress test for such a great number of times.”